[FTC Standard Disclosure] We received our sample Square Dot free of charge for review, and we recently became a Thermoworks affiliate seller after being a Thermoworks customer for over 12 years.

Thermoworks has started off 2022 by releasing their newest remote probe thermometer offering - The Square DOT. 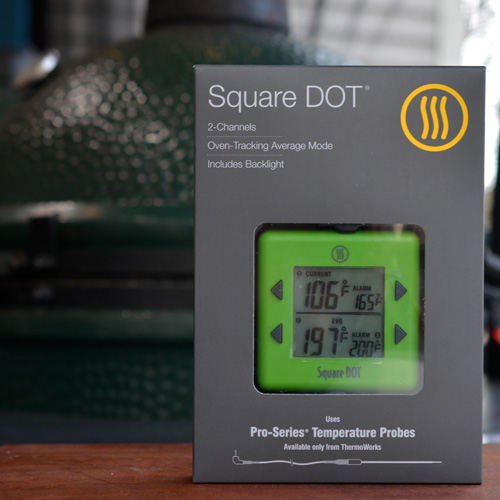 The Square DOT is a dual-channel remote-probe thermometer that currently lists at $69 from Thermoworks. I have put the Square DOT through the paces for the past week, and there is a lot to like about it. Here are the features that I find helpful.

Dual channels allow the device to manage two separate temperatures simultaneously. As shipped, the Square DOT can monitor the cooking temperature of your grill/oven and the internal temperature of 1 food item. Instead, you can replace the High-Temperature Air Probe with another food probe and monitor two foods at once.

Channel 2 can be toggled to give either the current temperature or a 15-minute average. I like the average setting for the air probe because it makes it less likely for a griller to start chasing slight incremental temperature fluctuations.

The concept of the original DOT was KISS, and the Square DOT continues that design path. Each channel has only 2 buttons, up and down. The display for each channel is simply the readout and set temps. That means the display can be larger, making it easy to read from 10-15 feet away.

Thermoworks is renowned for its accuracy, and the Square DOT is no exception. It comes with a NIST-traceable certificate of calibration.

The Square DOT has several options for using it in your kitchen or grill area. First, you can lay it flat on its back. Second, it has a fold-out stand for standing it upright. Finally, it has a set of powerful magnets so you can attach it to your oven door or, in my case - the metal handles of my grills.

You can set the alarm to notify you when your food hits the temperature you set.

At just 3" x 3" x 7/8", the Square DOT is compact and doesn't take up a lot of space on your kitchen counter or grill table.

The Square DOT is designed for commercial use with robust design elements such as molded-in splash-resistant seals and a plastic body, making it resistant to rain, splashes, and spills. Not that I spill anything at my grill table, ever.....what?

The Square DOT's backlighting makes it easy to use when dark out. Press any button and the backlighting will turn on temporarily.

The Square DOT comes with the Pro-Series High-Temperature probes, allowing them to be used up to 700°f while many other probe leads max out below 500°f. They also use more accurate thermistors instead of thermocouples for the design of these probes.

Compared to The DOT

One significant difference is that the Square DOT is.....well, square. But what else do you get for the extra $24? But the two most significant value-added features are having 2 channels instead of one and the average temperature feature.

My primary remote probe thermometer since 2013 has been Thermoworks ChefAlarm ($65). It is an excellent unit to compare against the Square DOT because they are similarly designed, manufactured, and priced. 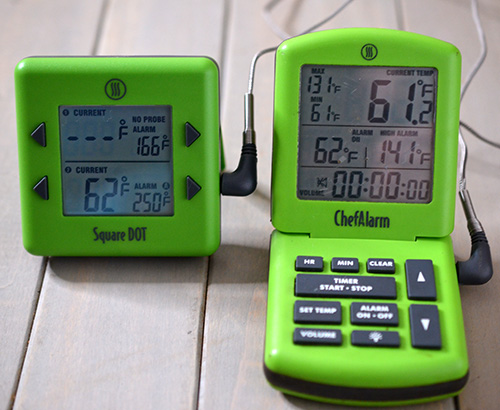 But with all of those extra features, the one limitation of the ChefAlarm is that it is a single probe thermometer. The Square DOT can monitor a food and cooking temp or 2 food temps, making it twice as useful when that is needed.

Listed at $69, the Thermoworks Square DOT 2-channel thermometer is rugged, practical, and accurate. It gives cooks insight into what is going on with their food without having to open and close grill/oven doors, causing temperature fluctuations. That's going to result in a better cook every time. I suspect this will become my go-to remote-probe thermometer based on its size and simplicity. 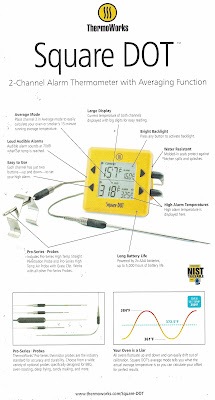