I'm heading out tomorrow for the weekend to take Trevor to Florida for a fishing trip with my father-in-law.  We're after the big bruising redfish that cruise the chilly Gulf waters this time of year.

This past weekend, we had some friends over to watch some of the big in-state rivalry football games like Auburn/Alabama (sorry, Steph), Florida/Florida State, Georgia/Georgia Tech, and Clemson/South Carolina.

On the tailgating menu was Grilled Chipotle and Honey Wings [click for recipe] (a recipe I developed to go with Bush's Baked Beans Honey variety) and a Steakhouse Burger.  This is a "non-recipe" type post since it's nothing very original, but you'll get the general idea. 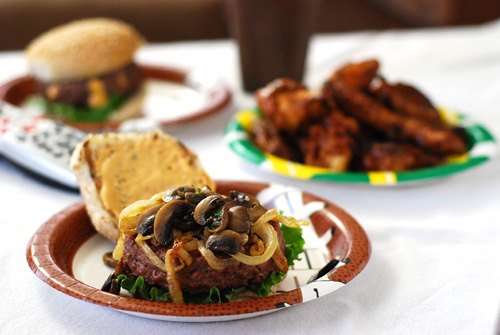 Like the cool football themed paper plates and cups?  Solo Cup Company has this line out in stores right now just in time for the bowl-game season and the NFL playoffs.   They have all the benefits of their normal plates (cut resistant, grease proof, etc) and are "cute to boot" (Alexis said that.....not me). 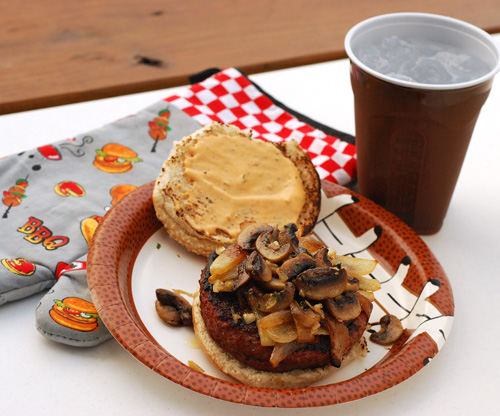 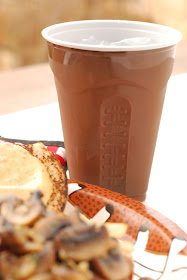 If you are planning bowl game or playoff get together, keep an eye out for the Solo Cup football line in your store.  I say "if" because the local Tennessee Vols are not bowl eligible and my hometown Jacksonville Jaguars have been mathematically eliminated from play off contention.  Mathematically eliminated?  How bad do you have to be at sports to even have "math" beat you?

I created and cooked a special recipe for yesterday's Thanksgiving feast.  It's called "Not a damn thing".  It didn't have much taste but it was low on calories!

Nah, the kitchens of Nibble Me This were shut down as we headed over the mountains to Franklin, NC to spend the day with my side of the family.  My mom cooked our traditional Thanksgiving feast which somehow manages every year to outstrip "nostalgia inflation" (where things tasted better in your memory) and be as fantastic as ever.

Late in the afternoon, I decided to walk off the carbs and headed down the mountain road...

beyond the cow pastures....

and took this picture of the barn...

The red brick silo in the picture was the inspiration for today's recipe and my 500th post -  Silo Brick Grilled Cornish Hens. 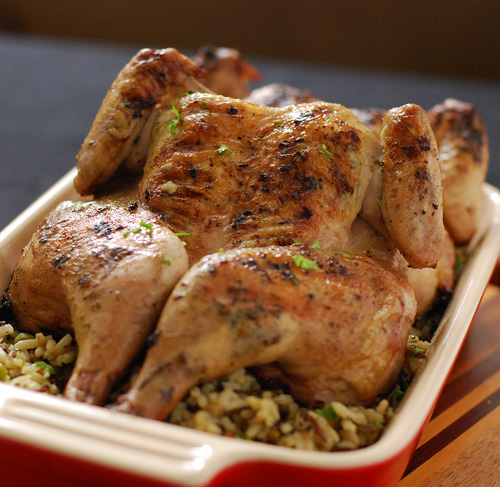 Silo Brick Grilled Cornish Hens
Servings:  4 (1/2 hen per person)
Ingredients
For the brine
For the compound butter
For the finishing oil
Instructions


I hope you all had a great Thanksgiving, spent time with family and arrived home safely!
Chris at 8:05 PM
Share

Last week when I smoked the two pork butts, you might have noticed one had the typical reddish BBQ rub on it but the other was looking a little "green". 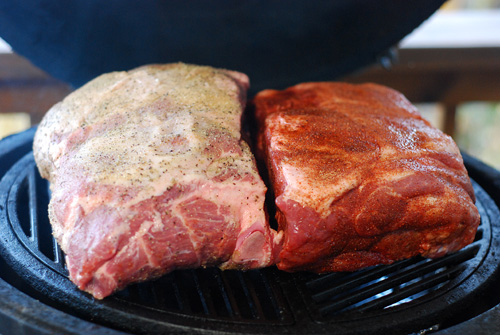 No, it wasn't a moldy, "special buy because it went out of date two days ago" piece of pork.  I was trying out Albukirky Seasonings new Green Chile Rub. 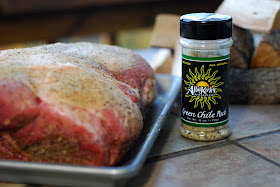 Kirk is a fellow Egghead and food blogger who, about a year ago, started his own line of seasonings and rubs that boast the flavor of New Mexico.


This green chile rub is a blend of the famous Hatch chiles, sea salt, garlic, black pepper and other seasonings.  Don't worry about the word chile, it is not spicy as much as it is flavorful.   The rub has an even blend of fine and medium grinds so it has texture to it.  Don't think of it as a BBQ rub per se, it is more of a multipurpose seasoning.  The aroma smells strongly of garlic and black pepper but the taste is well balanced once cooked onto food. 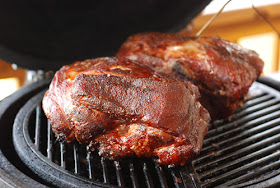 So far I have used it on grilled chicken and on a smoked pork butt, both were very good.  The pork still had the smoked flavor and nice bark but it had a unique Southwestern flair to it.  I have used it this week to make tamales, the fried tamale bites, "green eggs & pork", pork tacos, and tonight, I made enfrijoladas.

What the heck are enfrijoladas?  A week ago I would have had no clue either.  Honestly, I would have thought it was a made up word from Taco Bell's marketing department.

But I saw them TWICE in one weekend at Girlichef (who has never let me down) and Mexico in my Kitchen and knew I HAD to try them.  Click the links for their recipes as I am not posting one, but they are fried corn toritillas dipped in a spicy bean sauce and stuffed with kickin' meat (chicken, pork, or beef, doesn't matter).

I used black beans, garlic, dried cayenne, and cilantro for my seasonings. 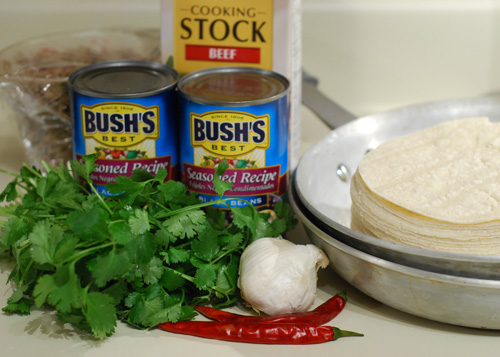 The fried tortillas start to get crispy... 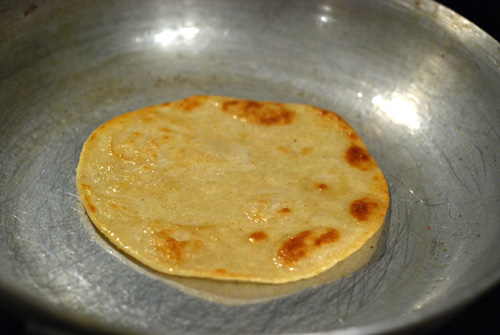 But dipping them into the bean sauce kind of softens them up, resulting in a nice combination of textures.  I should have garnished more but was hungry so I just sprinkled them with cotija cheese.

They might not look pretty and that is one of the worst plating/food styling/food photography shots I have done in a while.....but guess what....I don't care.  They were freaking excellent.  All 4 of us were moaning grunts of approval as we devoured them.  I can't believe I've never heard of these things before.

Oh yeah, back to the rub.  Albukirky Seasonings Green Chile Rub definitely works for me and I'll be buying some more.  Speaking of that, you can get it cheaper than I did because it's now on sale.  Kirk has marked it down from $7.99 to $5 a bottle (his other rubs and sauces are on sale too).  Link to Albukirky Seasonings

[Standard Disclaimer]  I pay full price for my Albukirky Seasonings and receive no compensation from them.  Kirk is an online acquaintance and fellow Egghead but that is it.  Based on legal counsel's advice, I cannot comment on rumors that Kirk has compromising photos of me at last year's Eggfest.

Yesterday we wanted some appetizer-snacky-game type food to munch on while we watched UFC-139.  I came up with two things - tamale bites and fried stuffed black olives. 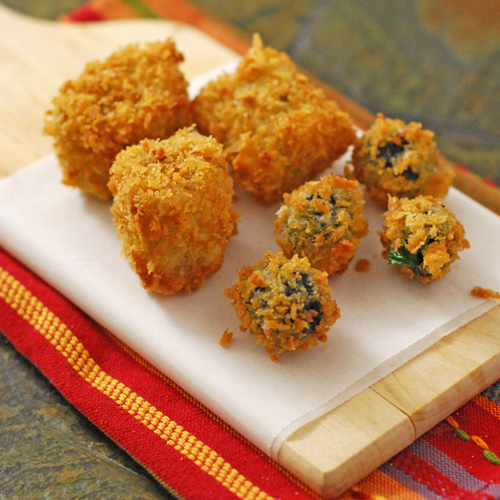 I wasn't sure how either would work since
A) I didn't know if the tamale dough would all cook solid into an impenetrable ball of concrete and
B) I had no recipe for either of these, I was just winging it.


When I first bit through the warm, crunchy crust and it gave way to the soft tamale and savory pork inside I knew I was on to something.  And the olives were down right addicting.


The olives were just large pitted black olive stuffed with a thin sliver of garlic, a small piece of pepper jack cheese, and half a leaf of cilantro. 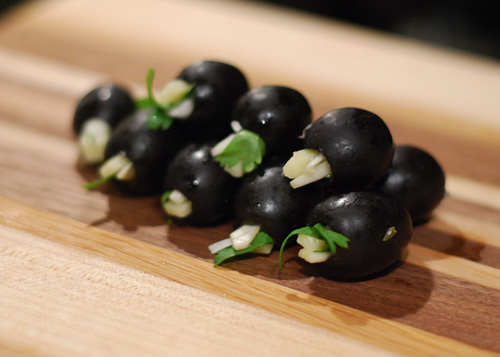 To get the breading to stick, we found you had to dip them in egg wash first, then flour, back to egg wash, and then in panko crumbs.  Then just a quick 30 second swim in a 350f deep fryer.  Season lightly with salt just as they come out and they are done.

For the tamale bites, I simply took leftover cooked tamales and cut each into 4 pieces.  I rolled each in flour (masa harina), egg wash, and then panko bread crumbs before deep frying them at 350f until golden, about 1 minute.

The high temperature in Knoxville today was at 1:30am.

With temps dropping all day, that meant it was a day for soup.  Or chili.  Or maybe both, because I wasn't sure which to call this dish I threw together for dinner tonight.  I wasn't even going to blog about this but Alexis liked it so much I changed my mind. 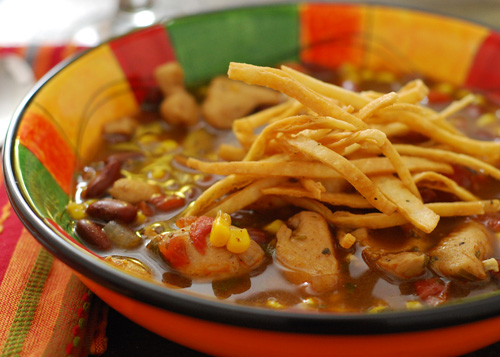 Then I Saw The Light
The onset of darker nights and colder temps cause some folks to suffer from Seasonal Affective Disorder (SAD).   I have to admit I am not as enthusiastic about getting out to cook when it's already dark when I get home from work.  According to the Mayo Clinic, light therapy is a common treatment for combating the effects of SAD.

The French have the mirepoix.  Cajuns have "the trinity".  What do tailgaters have?  Bacon, cheese, and bbq sauce!

Seriously, try to name one tailgate food that can't be improved with the addition of one or more of these.  So when Bush Beans sponsored a tailgate for us recently, I went "all in" and used all three for a great burger.   Since our tailgate had limited cooking set ups, I wanted a burger that could be made at home, transported and then quickly put together onsite.

But the beans tastes of cured bacon and real maple syrup, slow-simmered with a secret blend of seasonings, were whispering to me.  They kept saying "sweet" and "bacon".  I finally realized what they were telling me this burger really wanted....PIG CANDY!!!!! 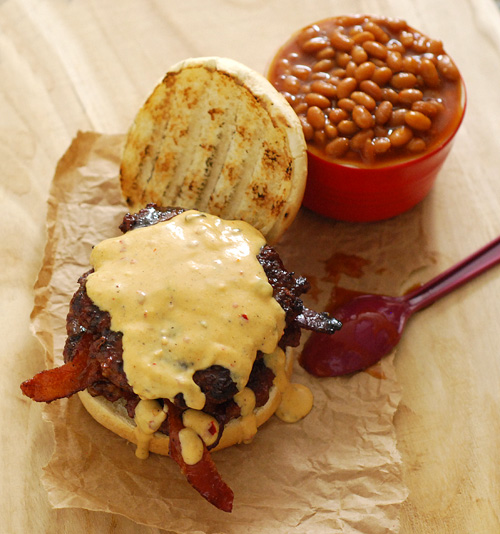 Ingredients
For The Burgers

For the Pig candy

For the BBQ Cheese Sauce 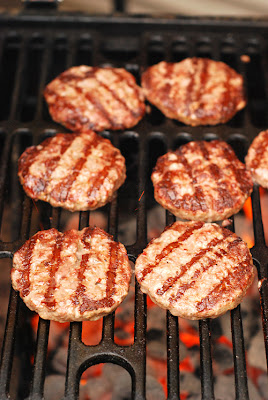 Bush Beans Gameday Giveaway
And now for the lucky winner of the tailgating package sponsored by Bush's Beans...... 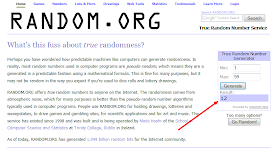 #12 - Big Dude said...I mentioned the give away on my blog - http://bigdudesramblings.blogspot.com/2011/11/grilled-cheese-for-breakfast.html


WOW!  Not only was Larry also #1 to enter this contest (as well as #12), Bev and Larry have hosted the East TN food blogger get together for the past two years.   I almost wanted to re-draw because it looks "funny" with another Knoxville blog winning from my Knoxville blog sponsored by a Knoxville company but Alexis said, "No way, he won it fair and square!".


Congratulations, Larry!  Email me your address.


Thanks everyone and get ready for my December giveaway - a nice boxed set gift package for the BBQ lover.
Chris at 6:38 PM
Share

How I Smoke Pork Butts for Pulled Pork

I smoked two pork butts yesterday and Matt asked via Twitter:  "Do you have a link to your pork method on the Egg? "

I didn't.  I have a few posts about pulled pork but I've never fully outlined the steps I go through for smoking pork butts on the Big Green Egg.    Here is what I do from start to finish.  It's not the only way or "right" way, it's just works for what we like to eat at home. 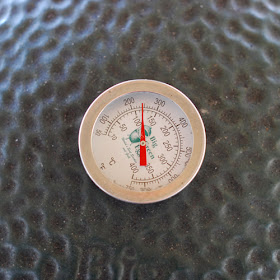 Rotate your thermometer dial so that your target temp is at 12 o'clock.  Then you can
see if you are on the right temp with a quick glance and from several feet away. 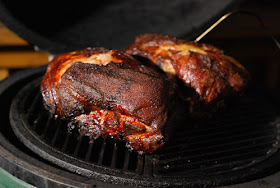