I have been enjoying my Smoke Hollow smoker/grill/gas grill since I bought it this summer. I've used it mostly for grilling because there were a few modifications I wanted to make to improve the smoker capabilities.

It's not that the smoker part is defective.  I would recommend this smoker/grill to the back yard griller.  But it has been my experience that ANY smoker under $500 is going to require home brewed innovations to improve their performance. For example, horizontal smokers like the CharGriller need standard mods as do Brinkmann vertical smokers.

Here is what I did to my Smoke Hollow smoker in the past week.


[The thought occurs to me that modifying and fabricating your cooking equipment is pretty specific to grilling/smoking.  When is the last time you heard about someone modifying their oven or altering their stand mixer?  I think it adds a level of personal involvement in our cooking.]

Issue 1:
Air gaps between lids of the cooking chamber and fire box. It might not look that bad, it's only 1/8th inch, right? But considering the distance around the lid, that is equivalent to having a 10.25 square inch hole in your smoker. This causes heat loss, inconsistent temperatures, and increased fuel consumption. 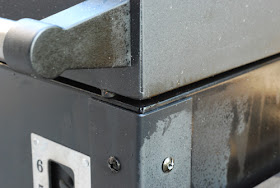 Solution: Install a gasket. I used a Nomex gasket for a Large Big Green Egg.


After installing the gasket, shut the lids, loosen the hinge screws, align the lid and re-tighten the screws. 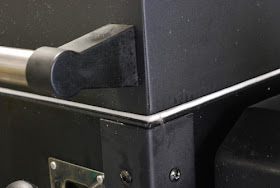 UPDATE:
The seal gasket worked great for use as a smoker but after the third or fourth time of GRILLING instead of smoking, the higher temps loosened the adhesive on the cooking chamber.  Another Smoke Hollow owner, Nic, and I were discussing this as it progressed and he used a more successful solution as follows:

Issue 2:
Air gaps due to use of “spot welds” in the construction of the fire box.

Solution: Seal the air gaps using JB Weld like caulk. It handles the high temps of the fire box with ease.

Solution: Extend chimney down to the level of the cooking grate. This will create even temps in the cooking area by keeping in the hot cooking gasses until they even out at the grate level.

I just rolled up some metal flashing, stuck it into the chimney. The flashing will try to unroll, holding it in place. 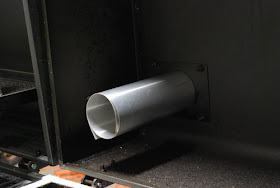 Issue 4:
No charcoal tray. There tray is meant for split logs only.

Solution: I added a standard charcoal grate purchased at Lowes. 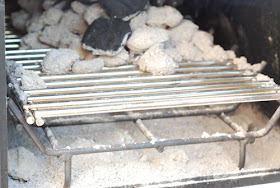 I did a test burn last night and the smoker worked noticeably better. There was minimal leakage and the temps held steady. Today I have been smoking chicken and have maintained 250f rather easily. 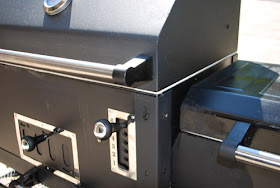 I did have two of the strips come loose during cooking HOWEVER, one was taken off and reattached during the install and the other I sprayed the adhesive instead of brushing it on.  I'll re-clean those two sides and re-do the adhesive properly.

Next Steps: Get a charcoal basket built for the fire box. Add a 3/8” plate to the bottom of the fire box to reinforce it and add thermal mass.  Get a rain cover so I can keep this out on my deck with my two Big Green Eggs.

Giveaway Winner
The winner of a copy of Rick Browne's 1,001 Best Grilling Recipes is Dirk.

Dirk I will contact you directly to arrange shipping. Thanks to Agate Surrey for hosting the giveaway of this recipe packed grilling book.
Chris at 3:44 PM
Share
‹
›
Home
View web version