Bone In Pork Roast on the Grill

Happy New Year!!
It's the beginning of 2011 and tomorrow is the two year anniversary of Nibble Me This so I thought I'd make a few additions to my blog.
Video Tips
I tried my hand at video recipes in 2010 and they were just too difficult. I couldn't get the detail wanted in 5 minutes or less and the level of stress was not enjoyable. This year I am going to incorporate brief video tips to focus on a given technique used such as this one I made for "How To Score Meat".

These are shorter, easier to produce, and have a narrow focus. I'll get better making and producing these as I go along.
Detailed Cooking Log
This one is for the BBQ addicts and data geeks out there. I have uploaded my cooking logs that I use to record the details of my longer cooks. It's right over there in my side bar, see the button that looks like this: 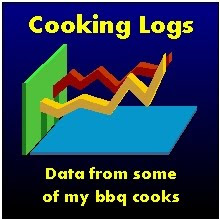 I plan to keep this updated and hope others might find it useful for planning cooking times, seeing what worked, and what didn't. I refer back to these often when getting ready to BBQ something.
But on to the main course......

Bone In Pork Roast on the Grill
Since Alexis had to work today, we celebrated New Years Day yesterday with a fabulous meal of a fire roasted rack of pork, collard greens, hoppin' john, and rice.

I used a 3 1/2 lb, five bone rack of pork. I scored it and seasoned with with 1 Tbsp of Holy Smokin' Chipotle and 1 Tbsp of maple sugar. 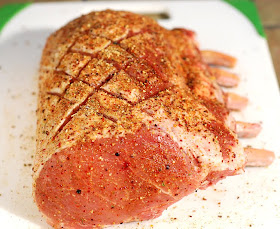 The Holy Smokin' Chipotle is probably one of the best new rubs I have tried in all of 2010. One of the tips I learned from a BBQ class with Mike Davis is to taste your rub by itself first. This one just sings with flavor, it was a taste symphony unfolding on my taste buds. 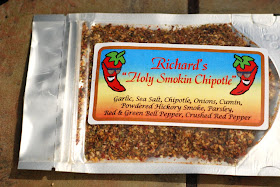 Unfortunately, it's not for sale. I received mine as a gift from fellow Egghead and Egghead Forum member, RichardFL. Richard makes it and a few other premium spice blends for himself and friends. I asked if he planned to market these great rubs and he replied, "No, takes the fun out of it, this is my hobby....I don't play golf anymore and fishing still frustrates me!"

I seared the roast, fat cap down over 400f direct heat on the Big Green Egg for 5 minutes. I flipped it and cooked another 3 minutes. I thought the temp was a little low for searing but got the tip from Chris Lilly's book and he was right. Again.

I then changed the grill to indirect heat, added two chunks of cherry wood and reduced the heat to 350f. I roasted it until it hit an internal temperature of 125f and glazed it with Big'uns Carnivore Robust BBQ Sauce. Carnivore is made by another Egghead and lucky for you, you can buy it at Carnivore.com. 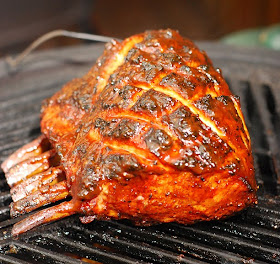 I let the roast finish to an internal temp of about 145f, when I pulled it from the grill to rest. One lesson learned: I did learn to NOT get BBQ glaze on the frenched bones. They stayed relatively white for the first 1 hour and 15 minutes but then as soon as they got glaze on them, they turned dark. 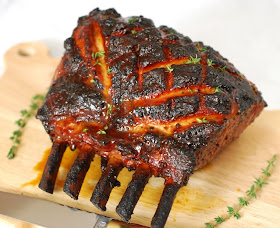 As you can see from the cooking log that roast took right at 1 1/2 hours after the searing. I let it rest for 30 minutes and the carry over cooking raised it almost 15 degrees to 161f. 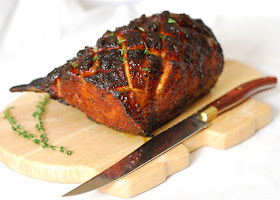 I usually like my pork roast at a finished temp of 150-155f so I was worried it would be dry but nothing could be further from the truth. 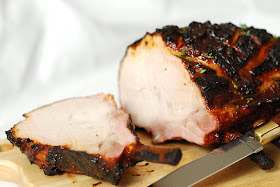 The roast was tender, juicy and I'd say the best pork roast I've ever had or made. The robust flavors of the rub and sauce were mouthwatering. What a way to end the year!

You could make this in the kitchen as well by pan searing or oven searing the roast before roasting it at 350f in the oven. Since you probably don't have Richard's Holy Smokin' Chipotle, you could substitute Tone's Garlic Pepper. It won't be the same....but it'll still be good.
Chris at 9:52 AM
Share
‹
›
Home
View web version