Alexis and I had a fun date night last night. Our youngest son had a sleepover birthday party and our older son had a date with his girlfriend. So we had dinner at Dead End BBQ. A month after opening, they seem to be doing well on our third visit. We had a 15 minute wait for seating and the quality of the food was very good again.

We we're going to see Men Who Stare At Goats but the reviews were so mixed that I just wasn't sure if I wanted to see it or not. Anybody see it yet?

Instead, we went to Sidesplitters Comedy Club and caught April Macie's show. She was hilarious. Raunchy as can be (she has an "irreverent brand of overtly sexual humor"), but completely hilarious.

Speaking of comedy, anyone remember the 80's song "Wet Dream" by Kip Adotta? It was full of fish puns like "Abalone, you're just being shellfish!" Well, today was..... 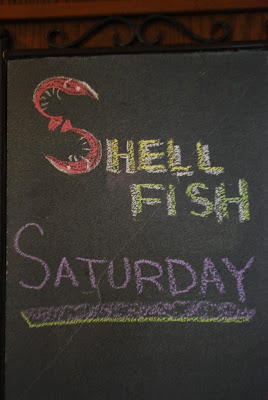 On the menu was (Yes, we actually have a small menu chalkboard in our kitchen) 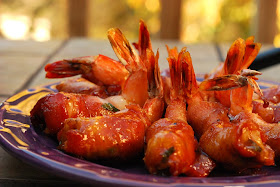 I was so lucky that I got to meet and assist Mr. Lilly prepping for a BBQ cooking class earlier this year and this was one of the dishes he presented. You can google the recipe name but what you'll find is not the same as how it appears in the book. The process is the same but the sauce is not. You can buy the book online, but here's a hint about the ingredients though. 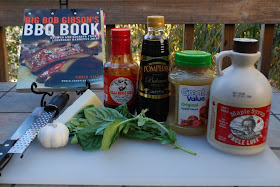 Notice all of the page tabs I have marked in the book in the above picture? That's because it's a great BBQ book and those are the recipes I want to try. It is a great read for both the novice and experienced BBQ enthusiast. (hint hint Christmas present for your Q friends.)

Two other tips he gave were
1) use THIN bacon with this dish and
2) cut the bacon on a bias like this. It gives you two long sides an inch longer than if you just cut it straight in half. That gives you a edge piece to tuck in and secure the wrapped bacon. 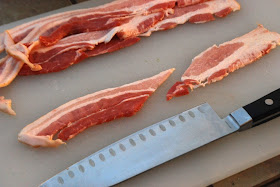 Another tip Mr. Lilly passed on was press down on the assembled shrimp to flatten it a bit so it will stand upright on its own before your put it on the grill. So when you put them together, make sure they can stand up. You don't want to be fiddling with them over a 400f fire. 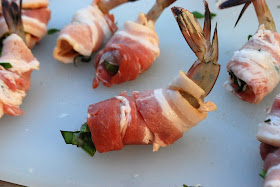 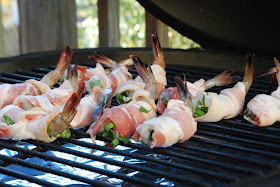 After cooking indirect for the 14 minutes at 400f, dip them in the sauce 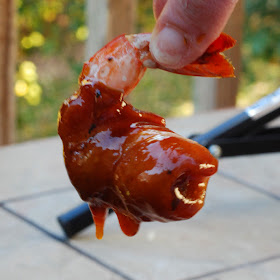 and put them back on for 3 more minutes. 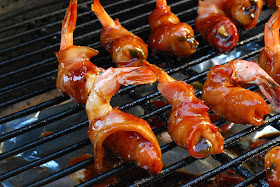 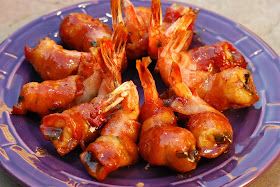 But were not near as good as the ones that Chris Lilly made. The shrimp was perfectly done and the flavor was perfect, but the bacon was not crisp like his was. He didn't pre-cook the bacon that I saw, so I'm thinking the bacon I used wasn't thin enough.

I mean, she brought home a 10.5 lb pork butt (butt of the shoulder, not the pig's ass) and I'm smoking that hunk o' oink for the next 15 hours for some bodacious pulled pork.
Chris at 6:17 PM
Share
‹
›
Home
View web version