The leaves have turned from green to golden, red, and yellow. The morning air is crisp, fragrant with a scent of autumn.

Crap. Summer really is over.

But on the bright side, college basketball is gearing up. Tonight several games were on and Brett, his girlfriend, and a friend were over watching a few games. And what better game food is there than chicken wings?

I've been wanting to try Iron Chef Michael Symon's Spicy Sriracha Chicken Wings ever since I saw them over at Hot Sauce Daily when they did their version. I just hadn't gotten around to it but tonight I gave it a spin. They dropped the cinnamon from the marinade and I subbed basil for cilantro (which made sense, given it was a Thai based recipe).

I used my basic 30-20-10 recipe for wings on the Big Green Egg. (375f degrees indirect heat, 30 minutes-flip, 20 minutes-flip, toss in sauce, 10 minutes, remove). That technique has given me consistently great results. It would probably work in an oven, but I KNOW it works on a grill. 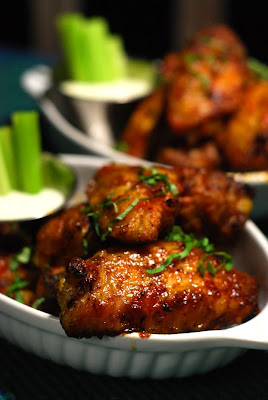 Instructions
Make a marinade with coriander, cumin, salt, and oil. Marinade wings for 4 hours in a ziploc bag.

Get your Big Green Egg or grill up to 375f on indirect heat and cook for 30 minutes. Flip chicken.

Cook another 20 minutes and toss in the sauce.

Cook 10 more minutes, to crisp up the sauce. Serve with the usual suspects (celery and blue cheese or ranch).

TIP: To get a nice crisp skin when roasting your wings instead of frying, start with a "dry" wing. Let them sit exposed in the fridge for 30 minutes or so. 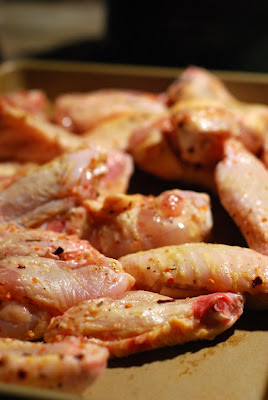 TIP: Don't crowd your wingettes and drumettes. You want your hot air to get around all sides to avoid the dreaded "rubbery skin". (I love the flames jumping up at the bottom of this shot.) 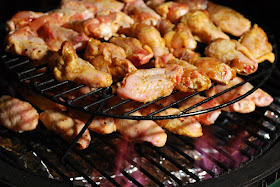 TIP: "Grid Extenders" or a raised rack are great ways to increase the capacity of your cooker, but just remember that the higher rack is a good 10-15 degrees (f) hotter than the lower rack. So rotate the wings from top to bottom about half way through. 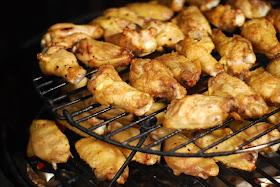 TIP: When serving appetizer portions, serve with individual dipping cups of ranch/blue cheese dressing. No one likes a "double dipper". 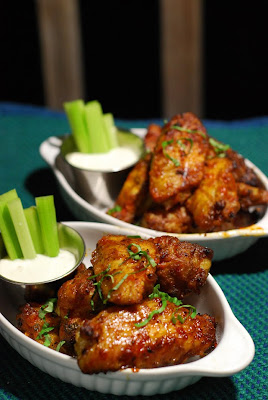 I was surprised. The flavor was not just a simple insult of heat. It was much more complex. In fact, it started off with the taste of the spice. Wow, it really wasn't that hot at all after the first bite. It took a few bites for the "kick" to build , layer after layer. Then the warmth crescendo-ed into a torrid heat. This will sound completely dorky, but it reminded me of The Ride of The Valkyries, one of my favorite songs to perform in symphonic band, back in the day.