When I was in high school, classmates Andy and Margaret Z's parents owned a cool deli in the mall in Jacksonville, Florida.  It was called Mr. Dunderbaks and it had an old world feel to it with imported European foods and music piped in that made you feel like you were somewhere in the Alps. Later on it was renamed European Street but it was still the same place. They also had an expansive line of high quality, hard to find beers that filled the length of a wall.  If you drank one of each kind (tracked on a card), you won a free beer a week for a year or something like that.  I don't remember because I never got close.  It wasn't easy to do because this was a cafe not a rowdy bar and you were limited to 4 beers per visit.
My friend Carson worked there for a while.  Sometimes I'd hang out there and have a beer or two as he closed up.  My wife and I would love to sit in the "outdoor cafe" part which was really just the store front in the mall which was made to look like an outdoor cafe.  Great place to eat, have a few beers, and people watch.  Ahhhh good times.

European Street also had inventive sandwiches, some were triple deckers.  They weren't cheap but they loaded about 1/2 pound of thin sliced meats, fixings, and hot German mustard on them.  The Smokerschmidt, Blue Max, and Pizzaroni were some of my favorites.  Their desserts were decadent pies like Snickers pie and Reese's peanut butter pie.  If you ordered a dessert at the bar the deli ferried it over via a wicker basket with brass bells attached to a swing line.  You'd hear the bells clanging and look up to see a basket scooting overhead to the bar, memorable and cute.

But my absolute favorite thing that they made was their Beer Cheese Soup.  It was thick, creamy, and luscious.  When we moved to Knoxville, it was one of the things we missed the most about "home" so I tried making a few recipes that I found on line but none of them really hit the mark.  So I stole from this one, borrowed from that one, added a thing or two and this is what I ended up with.  This isn't a clone recipe, it is more of a clone of how I remember it.
This soup is smooth, rich, and will warm you to the core on the most frigid of days. Use a good quality beer as it is one of the stars of the dish.  For the cheese blend, you can use whatever you want but you want 2 cups to be some kind of cheddar (orange, not white), 1 1/2 cups of some type of "melty" cheese (provolone, fontina, gouda, edam), and the last half cup can be a flavored cheese (something smoked, sun dried tomato havarti, or something like that).  For the bacon you want something thick and smoked.  Finally, if you want a thinner soup, just up the broth to 4-5 cups. 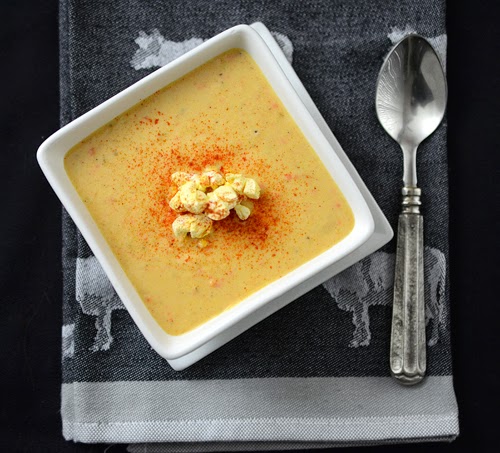 European Street moved out of the mall decades ago but you can find them all over Jacksonville, Florida.  If you are ever there, be sure to check them out.  They have fantastic food, exceptional beers, and live music events.  If you can't get there, at least try this soup.
Chris at 9:15 PM
Share
‹
›
Home
View web version