One of the best things about smoking meats that take hours and hours is making something BBQ enthusiasts call Atomic Buffalo Turds or ABT's for short, as an appetizer. Everyone has their own version but they are basically a cheese stuffed jalapeno wrapped with bacon and smoked. They are spicy hot but not like you would think. I don't care for the heat of jalapenos but I think these are great. 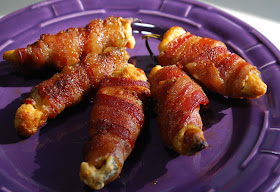 I halve jalapenos and then scrape the inside of them with a teaspoon to get out all of the seeds and veins to make a little jalapeno canoe. I put a "fat match stick sized" piece of andouille sausage in each "canoe". Then I stuff each with a 50/50 mixture of cream cheese & shredded cheese, today using colby/jack. The cheese will expand so I try not to overstuff them. I wrap each with a slice of bacon then sprinkle it with BBQ rub and turbinado sugar. Smoking them at 225f will take somewhere between 60-90 minutes, until the bacon is as crisp as you want.

Ok, now an admission. My first ribs of 2009 sucked. They were horrible, almost as bad as ribs from a restaurant. They were so bad it needed a Crime Scene Investigation. Here is a summary of where things went bad.
I've been so happy with my cooking for the past few months, so I'm not all that upset over a bad cook. Disappointed, sure. But I'll be back on my game next time.