[FTC Standard Disclosure] Chris and I traded copies of our books, so while I didn't pay for this book, I exchanged something of equal value, so I would not consider this a sponsored post.

If a new BBQ or grilling cookbook has a few of my personal favorite types of recipes, then I'm making those first.

Cooking the favorites makes sense for a couple of reasons. First, I have already tried them often and have a wide range of experiences for comparison's sake. Second, I like to see new spins on old favorites. Third, favorites are favorites for a reason; I want to eat them!

In no particular order, some of my favorite recipes to find in grilling cookbooks are:

The Four Fundamentals of Smoking

So when I got my hands on Chris Sussman's (The BBQ Buddha) first book, The Four Fundamentals of Smoking, it should be no surprise that one of the first recipes I cooked was his Smoked Spatchcocked Chicken with Spicy Alabama White Sauce.

This bird really hit the spot. It was lightly smoky, juicy, and mouthwateringly tangy. I knew it would be excellent because Chris Sussman is a skilled live-fire cook. I'll do a full book review later; this post is just about the delicious chicken.
Chris at 4:30 PM
Share

[FTC Standard Disclosure] We received no compensation for this post.
I had a raging internal battle this weekend, my diet plan said "chicken" but my appetite said "smashburgers".  Guess who won out.
These burgers were fantastic - cheesy, beefy, salty, and that fresh off the grill flavor. The Canadian bacon brings a welcomed crispy texture, saltiness, and a bit of umami from the cure.
Chris at 6:30 PM
Share

[FTC Standard Disclosure] I received an uncorrected draft of BBQ Revolution from the publisher for review. I received no other compensation. The link for the book is an Amazon Affiliate link, which I will receive a small percentage of if you purchase the book via the link.

They say "don't bury the lead" so I'll tell you upfront that this is my favorite new BBQ and grilling book from the 2021 offerings I have seen.

BBQ Revolution fired up my yearning to get out and grill. After 12 plus years of blogging about BBQ and grilling, I had gotten into a bit of a rut. I needed to shake things up and BBQ Revolution has done exactly that. This book has gotten me excited about firing up the grills again. 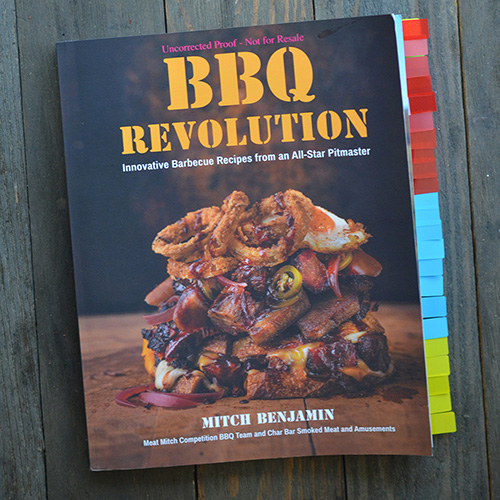 Mitch Benjamin has built his own BBQ empire over the years.
In addition to those accolades, Mitch has cooked for professional sports teams and on national television shows.

BBQ Revolution is a full-sized, hardback book. By a quick count, it has almost 90 recipes in a rather unique organization suited to Mitch's experience and background. Instead of the typical rubs/sauces, beef, pork, chicken, and everything else, BBQ Revolution is organized as such:

Recipes that I Have Made

I jumped right into making recipes when I got my hands on a draft copy of BBQ Revolution and there was not a single dud in the batch. I enjoyed each and every one of these.

I'm a sucker for brisket so of course, that was one of the first recipes that I tried. Solid recipe whether you are cooking brisket at home or for competition. 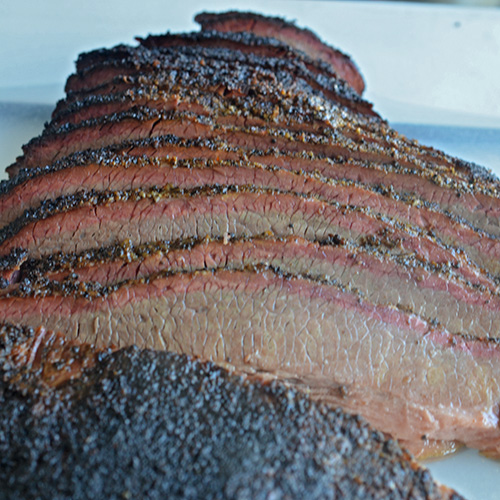 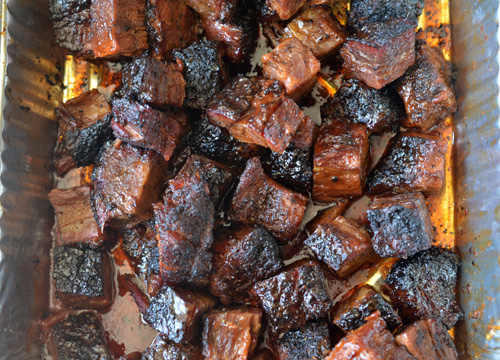 I sort of followed Mitch's recipe. I varied the recipe a little bit because I was making this for eating at home and not a BBQ competition. It was still fantastic served with a golden mustard BBQ sauce. 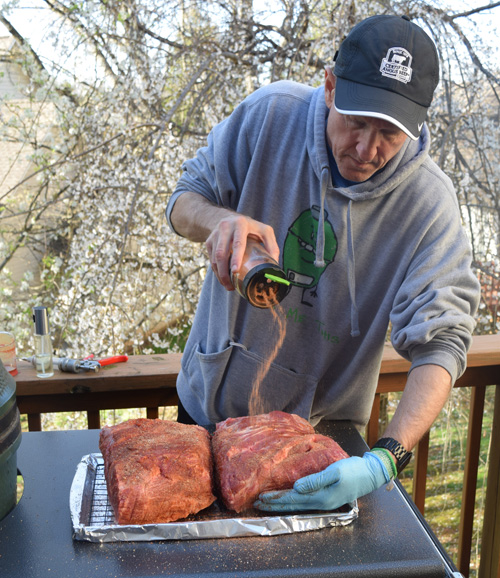 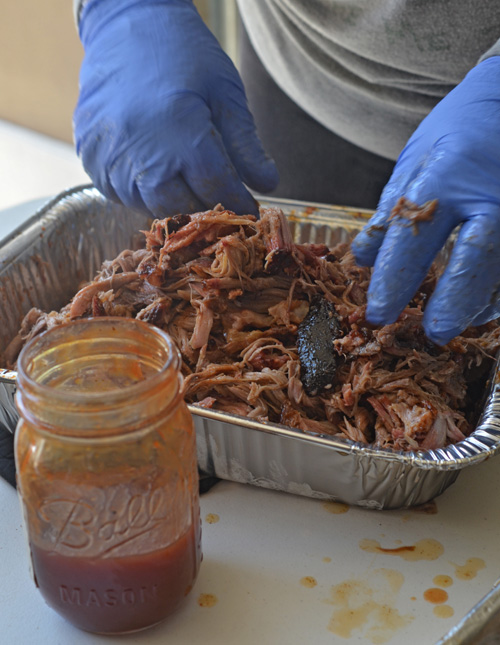 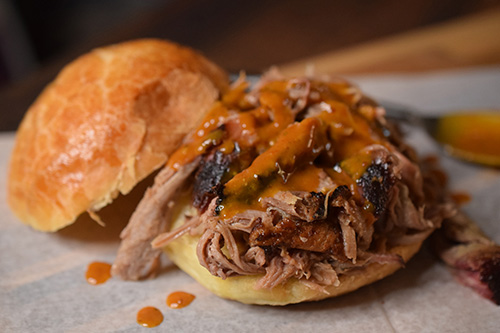 Another perennial favorite of mine, I had to try his Alabama White Sauce on some smoked chicken. Winner, winner chicken dinner is an overused saying but it does apply here. 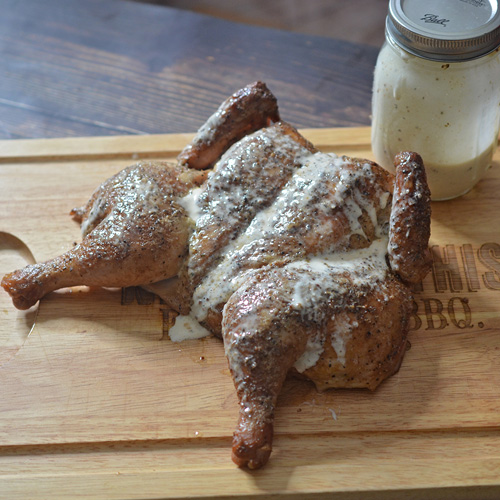 My family was in town and we included this TexMex dish in our buffet. It was a big hit but we made a lot and there were 4 other dishes, so we had some leftovers. I took a cue (I guess I should say "Q") from the Leftover Q chapter and reinvented this as Smoked Brisket and Charred Corn Chowder. I just made a cream soup base and stirred in the leftovers. Talk about amazing. 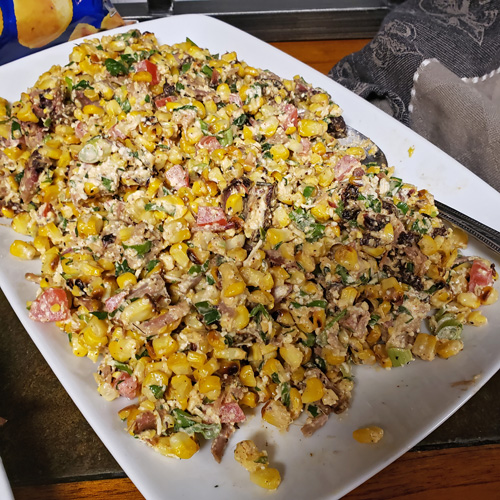 Wow. This was the recipe that put the biggest smile on my face. It kind of looks like a mess here but the tastes were out of the world. It has candied bacon (aka pig candy), burnt ends, jalapeno cheese grits, pickled jalapeno and shallots, and BBQ butter. It sounds like you are having sex when eating Charred Bits and Grits because you're moaning so much and calling out to higher powers (OMG). Yeah, I just said that.

Recipes that caught my eye

So many recipes, so little time, am I right? But here are some of the recipes that I haven't made yet but want to.

BBQ Revolution is loaded with color photography by Isaac Alongi. Almost every recipe has an eye-catching, mouth-watering photograph. The photos are mostly final plating pictures and some in-process or how-to photos.

Whether you are new to grilling or a seasoned grill master, BBQ Revolution is sure to fire up your grill or smoker this summer with flavorful recipes, cooking strategies, and helpful advice. It got me excited about grilling again.

5 stars – an absolute resource, I will refer to it frequently
4 stars – very good cookbook with value-added tips, photos, guides, and other content
3 stars – Good, average cookbook, glad to have it on my shelf
2 stars – a recipe collection
1 star - destined to gather dust on the shelves of a second-hand book store

If you are subscribed to get my blog posts emailed to you, there is a slight change this week.

Google is shutting down the Feedburner email subscription service to which you subscribed to receive Nibble Me This posts by email.

We are transitioning our active subscriptions to follow.it this week so you should see uninterrupted service.

[FTC Standard Disclosure] I received no compensation for this post. I do get a small percentage if you purchase any Amazon Affiliate links in this post but it's minuscule, I promise you.

Here is just a quickie for Taco Tuesday because this marinade was so delicious - Fajita Chicken Tacos. 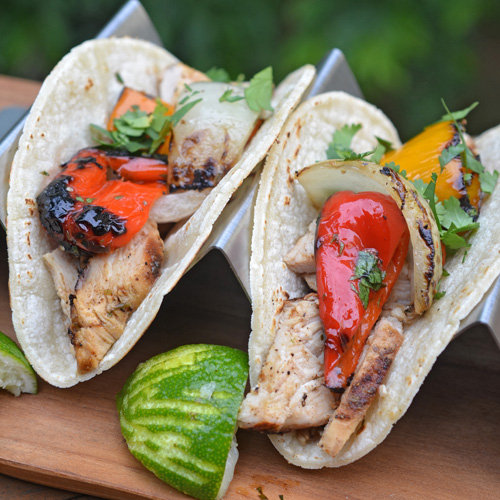 This has quickly become our preferred fajita marinade after just one time using it because the flavors were amazing on the grill. We have had a different fajita marinade that we've used for chicken for years and it is good but the green chile powder in this one makes it an order of magnitude better.

Steak, Over Easy Potatoes, and Eggs

You must think that I messed up with the "over easy potatoes", right? Nope. We call these Over Easy Potatoes because they are skillet-cooked Honey Gold potatoes tossed in butter and Over Easy Seasoning.  So. Freaking. Good. 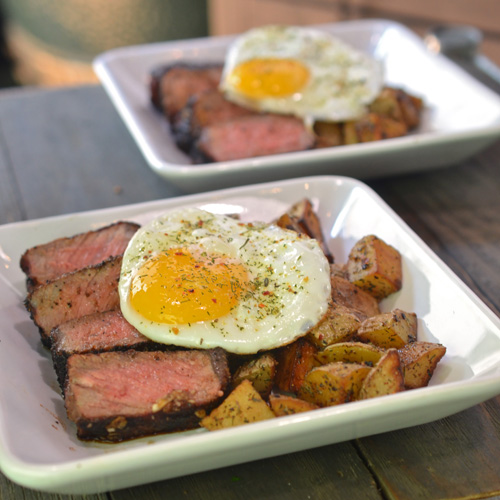 [FTC Standard Disclosure] We received no compensation for this post. However, in full disclosure, I have contracted with Oklahoma Joe's in the past.

This past weekend, I made Chef Edward Lee's recipe for Grilled Pork Chops with Knob Creek® Bourbon Mustard Sauce on the Oklahoma Joe's® Rider DLX. It was succulent, smoky, and delicious. 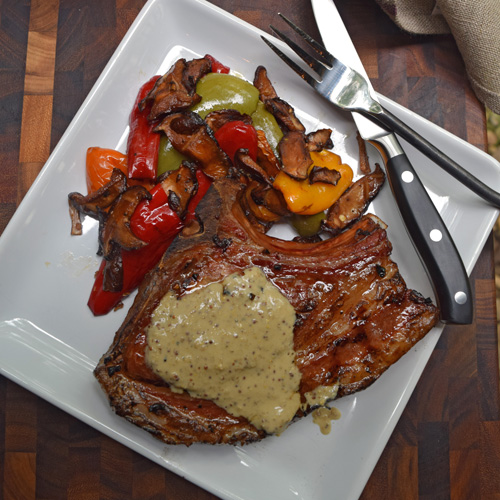 The James Beard Award-winning author, chef, and television personality loaded up his Oklahoma Joe's Rider DLX (just like mine) in an old Chevy truck and went trailgating through bourbon country. What is trailgating?

Trailgating is a journey. A journey down the bourbon trail to discover the flavors and stories that make bourbon and BBQ American traditions.  ~Chef Edward Lee

Oklahoma Joe's tagged along and created a well-produced and inspirational docu-series about Chef's journey. It's only about 10 minutes per episode, and they are absolutely worth the watch. You can find the four installments HERE. In each episode, Chef shares a recipe inspired by the stories that he found.

The Grilled Pork Chop with Knob Creek® Bourbon Mustard Sauce is the first such recipe.  Here is how my cook-along went.

After watching the video, I didn't want my pork chop to be a run-of-the-mill pork chop, so I went on a journey of my own to Hen + Hoc in Knoxville's Old City.

[FTC Standard Disclaimer] We received no compensation for this post.

This isn't a recipe post, just notes and thoughts about the brisket cook I did last weekend.

About 10 days ago, I got a text from my friend, Kim, letting me know she was at a store that had whole brisket for sale about $3 less per pound than the local going rate. By the time I got there, there was only a single brisket left and it weighed in at 12.3 pounds. It wasn't exactly what I wanted but I wasn't going to say no to a USDA Choice whole brisket for just $24.

What I Look For When Buying a Brisket

So if this wasn't exactly what I wanted, what do I normally look for when buying a brisket? It is a blend of things that I have personally found to make for a more consistent product. 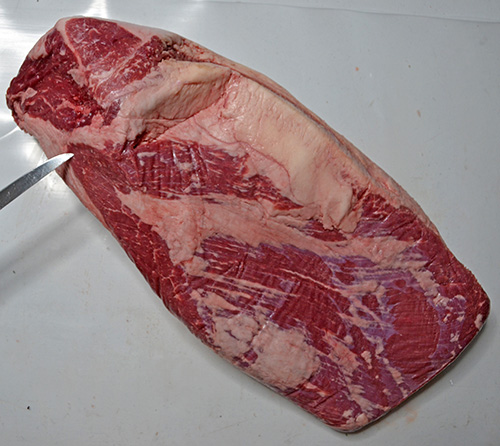 I offered to smoke Kim's brisket (16.93 lbs) while I smoked mine since she was the one who tipped me off about the sale. I used my usual competition brisket timelines but modified it a few ways. 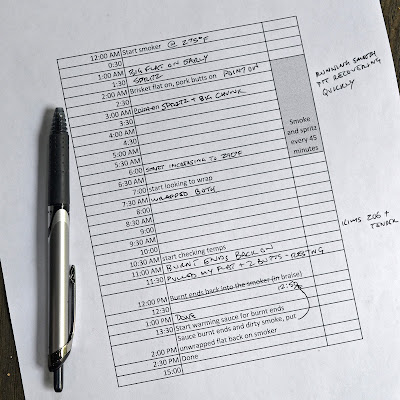 Ideally, I would have done this about 12 hours before smoking (about 2pm), but life happens and you roll with it. Kim wanted burnt ends (who wouldn't?), so I planned to split the briskets like I do in competitions.

The Deep South Smoker is a gravity-fed pit, meaning that there is a vertical chute of coal that slowly drops down into the firebox as it burns through the coal. It has insulated cooking and firebox chambers, making it extremely efficient. I like the concept because it lets me load the chute with charcoal and then add wood chunks or cubes to the firebox for smoke as desired. So it lets you apply smoke in doses.

I'm not ashamed to admit that I use the "Texas-crutch" more often than not when I'm smoking briskets. When the briskets were over 160°f  I wrapped them in foil, with a small amount of beef stock (about 1/3rd cup) and some dried onion (maybe 1 tablespoon).

As each item finished, I put them in a hotbox (I like Cambro UPC 300) that I preheated by pouring a pot of boiling water in a hotel pan on the bottom rack. This keeps big meats warm for hours.
I used to do the "FauxCambro" or FTC (foil-towel-cooler) method where you use a dry, warm cooler as a hot holding box.  You put the foil-wrapped meat in a cooler, cover with a few beach towels and keep the cooler closed until ready to remove the meat.

I learned this technique from a competition BBQ class from a KCBS Team of the Year winner. I slice the rested point into 1" cubes and put them into a half-sized steam pan. I pour in enough beef stock to cover them about 1/2 to 2/3rds the way up the sides. Then cover tightly with foil and put them back into a hot spot of the cooker for 75-90 minutes. 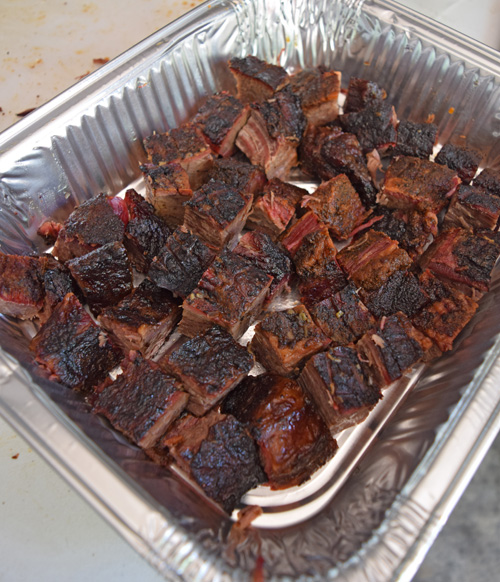 When I do multiple briskets, I usually end up with leftover jus from the wrapped foil. I had an idea this time that I came up with from a similar process that I do with pesto. I froze the jus in silicone ice trays (dedicated for this purpose so you don't get brisket tasting ice cubes) and then saved the jus cubes in a zip bag. Now whenever I want to fortify a soup, make a gravy, or just want some beef jus, I just thaw them out. Clever, eh? 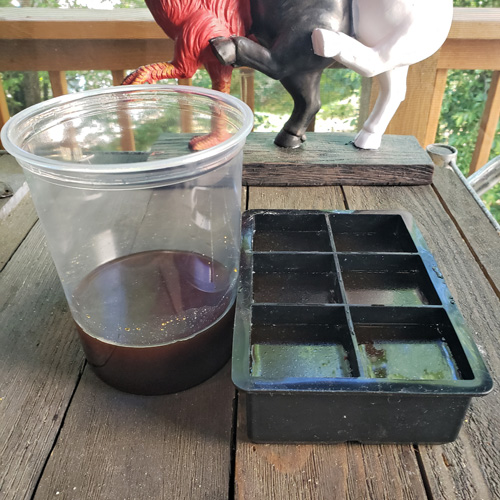 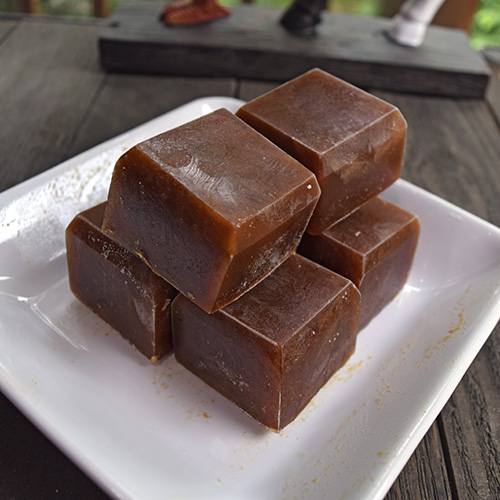