So you got a Visa gift card for Christmas and it's burning a hole in your pocket?  If you use a kamado style grill, the Kick Ash Basket might be just the ticket. 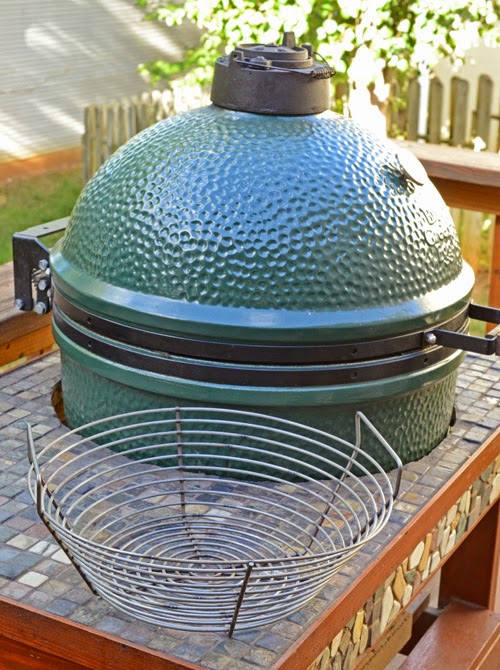 I have to admit something up front.  I almost didn't accept this product review because I had seen this accessory online and I had some preformed notions about it before ever seeing it in person**.  I thought it was a solution to a problem that wasn't really a problem.  I thought it was a little silly, I mean, how hard is it to stir your ash?

My BBQ teammate and neighbor, John, echoed those thoughts when we first got it. For three months we have heavily used the Kick Ash Basket for low and slow BBQ, hot and fast grilling, and even the extreme high temps of pizza cooks.  In that process, our skeptical (i.e. prejudiced) minds have been changed.

Charcoal Baskets
While relatively new in the kamado world, the Kick Ash Basket is actually not a new concept in the barbecue world.  Charcoal baskets are pretty common for ugly drum smokers (aka "UDS" - homemade rigs made from 55 gallon drums) and offset smokers. They are used for preventing air flow problems and for easier refueling. They are most often made with expanded metal and maybe some metal edges, like this one from my Pit Barrel Cooker.

The nicer models have baffles to make the fire burn in a pattern (called a snake, wick, or fuse burn) instead of the coal all catching fire at once.  This gives a longer burn and more temperature control.  Here is a typical coal basket for a nice offset smoker.

But for some reason, this idea never caught on with the kamado grilling crowd.  Perhaps it is because kamados can go 20+ hours on a batch of coal whereas UDS have to be refueled every 10-12 hours and some charcoal pits every 4-8 hours.

Back in 2009, creator Chad Romzek, was bumping into the typical learning curve issues on his first kamado grill - a Grill Dome.  He thought there had to be a better way and came up with this.

The Product
The Kick Ash Basket is such a charcoal basket but made specifically for kamado style grills.  They are made from raw American steel and come in three shapes/sizes to accommodate almost any standard kamado (Big Green Egg, Kamado Joe, some Primo, Vision Grills, etc). 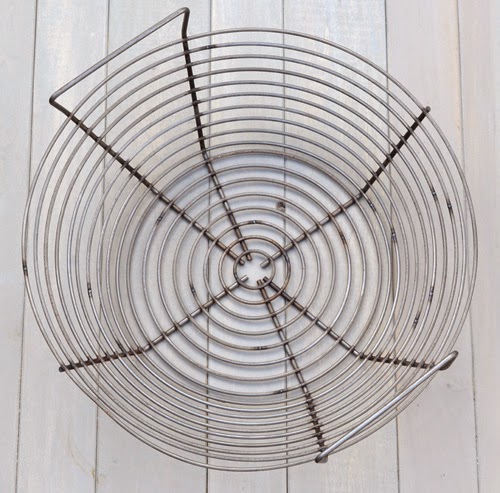 Smoked A Few Beef Briskets On The Kamado Grill

I've smoked a bunch of briskets lately and I'm smoking another one tonight for Alexis' office party on Christmas Eve.  This isn't going to be a recipe post, just some random thoughts and notes for my BBQ friends.  Also, excuse the photographs as most of these are mobile phone pictures taken on the fly.

Since I have been smoking so many briskets, I have had some leftovers.  Here is a quickie that I made this weekend - beef brisket sliders with crispy fried "tobacco onions" and au jus.  There is no tobacco in them, they are said to resemble strings of tobacco. 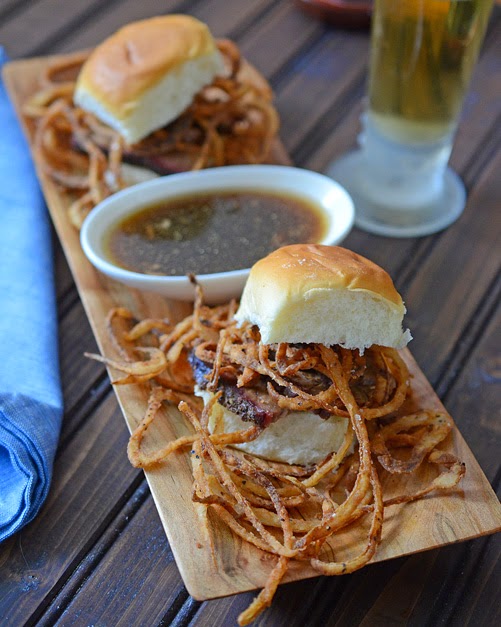 I warm up slices of brisket in the leftover au jus over low heat.  This is the best way to warm leftover brisket up - low, slow, and juicy.  If you heat brisket up fast (microwave, high temps), it is going to dry out before it finishes warming up.  Plus, this way pieces of the beef and seasoning fall off into the au jus making what the Louisana folk call "debris" - the ultimate dipping au jus.  The "tobacco onions" are just thin sliced onion dusted with flour, garlic pepper seasoning, and Creole seasoning and deep fried.  Flat out awesome, leftovers are a good thing.

I used to not be able to get a decent smoke ring on my brisket when I cook them on my ceramic kamado grill (Big Green Egg, Grill Dome, Primo, Kamado Joe, Vision, etc).  They still tasted great but when it came to appearance, they just couldn't compete with the smoke rings we'd get when we smoked them on our wood fired trailer pit.  But with just these few changes, lately I have been getting noticeable smoke rings to go with our tasty and tender brisket.

I haven't played with this enough to determine whether it is one of these things, a blend of a few, or a combination of all four.

For the triangle wood set up, I put in three 13-15" log splits in like pictured below.  I try to rest the top end right where the firebox and fire ring meet on a Big Green Egg or just above the air holes on kamados with a single piece fire bowl/ring, for example, a Vision Classic. Then I fill in around and over it with coal.  John and I think it might have something to do with getting a steady long burn although if you are mixing up the same quantity of wood chunks in with your coal, you should get the same result in theory.  Whatever, this works so I'm sticking with it. 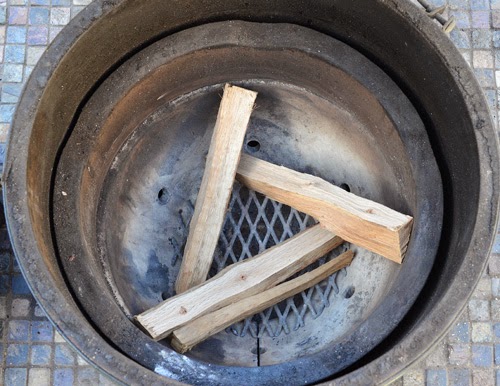 Tuning Plate - Part II
I mentioned in a previous post that I am experimenting with a tuning plate on the kamado grill, much like stick burners use to even out hot spots.  The Big Green Egg and other kamados heat relatively evenly, but there are open spots around the plate setter or heat diffuser that allow radiant heat to come straight up and hit any meat directly above those gaps.  It's a real pain with ribs or brisket where the ends have to go over these spots.

So to block those gaps, I made a tuning plate out of a 16" pizza pan that fits above my plate setter and drip pan like this.

This way some of the heat and smoke is deflected outwards, some is deflected towards the middle where it can come up through the holes.  It doesn't block anything - it just redirects.  From the side, the set up looks like this.


So when all of this is put into the kamado grill, it still has plenty of room for air to circulate.  The drippings that fall onto the tuning plate pretty much drip down into the drip pan below.  The few drips that don't drip down harden and are easy to knock off with the grill brush scraper. 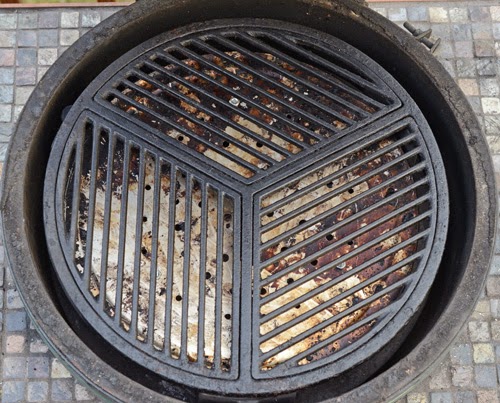 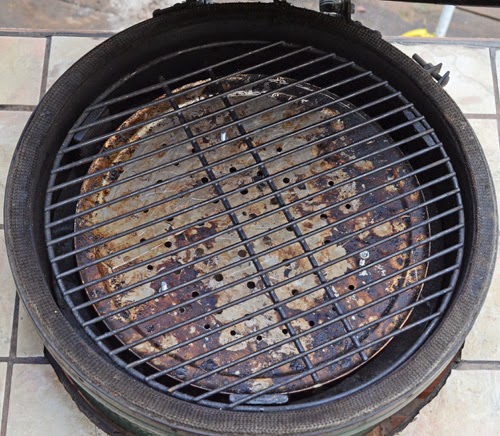 So is a tuning plate for a kamado grill necessary?  No but it is definitely an improvement when indirect cooking large cuts of meat that hang over the gaps, in my opinion.  No charred ends. Total cost was less than $10.

Like most everyone, I trim the fat cap down to 1/4" or less.  On the other side, I also cut out as much of the hard fat between the point and flat that I can get to.  A flexible, sharp boning knife helps.

I use a slather to help the spice rub adhere to the brisket.  Sometimes I'll just use the injection liquid that leaks after injecting and rub it all over before seasoning. 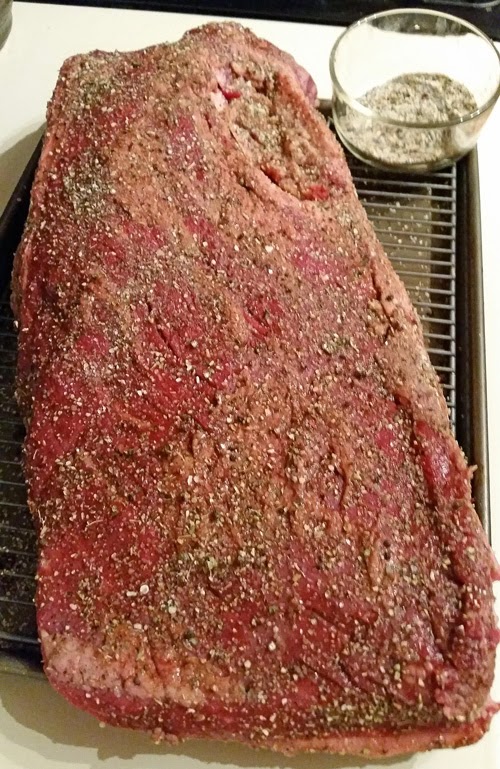 Sometimes I'll use a quality, highly seasoned mustard like El Dorado Mustard (The Mustard that Bites Back!). 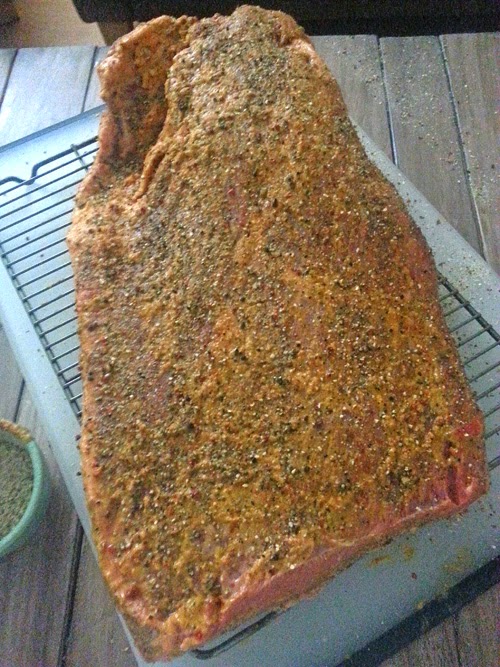 Other times I use Chris Lilly's method (Fantastic book - get it if you don't have it) which is a paste of beef bouillon or beef base mixed with Worcestershire sauce.

The last brisket I did was for our office Christmas party and the theme was "come as you are" so everyone wore pajamas.  I found the goofiest PJ's I could, a great big onesie.  Here I am slicing brisket on the meeting table in my office. 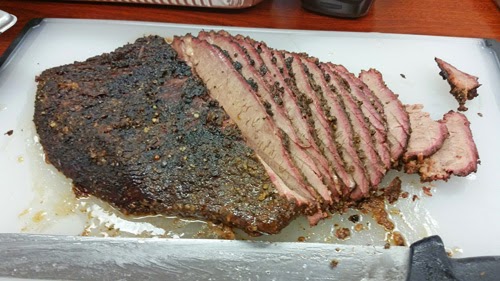 Here are the meat logs from a few of my recent brisket cooks.  If you don't already take notes for your longer cooks, take a cue from Meathead at AmazingRibs.com and start doing it now.  You will learn so much more by analyzing your various cooks and you can use them later as a reference. 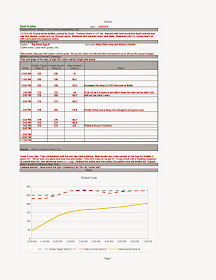 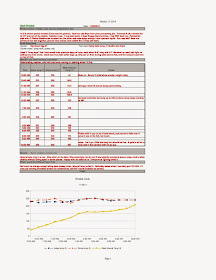 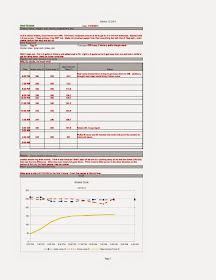 I thought the last one was interesting because you can see it stalled out lower (150's) and longer (hours) than the other two but at the end, the temp shot up 50 degrees in two hours.  (I slept through a data point which is why there is a gap.)  Just goes to show, every cook can be a little different and that BBQ is ready, when it is ready.

Gotta run....I have got that 12.6 lb brisket waiting in the fridge.

A popular way to make "oven fried chicken" includes using a mayonnaise slather on the chicken.  The mayonnaise does a few things, such as;
Typically those recipes go for an Italian seasoned chicken but I thought it would be good to take it in a Southwestern direction by adding Mexican crema, Cotija cheese, oregano, cilantro, and red chile flake instead.  As it turns out, this is the closest thing I have come to crispy "fried chicken" on my kamado style grills.  I was just using the Big Green Egg as a brick oven, so you could just as easily make this in your oven. 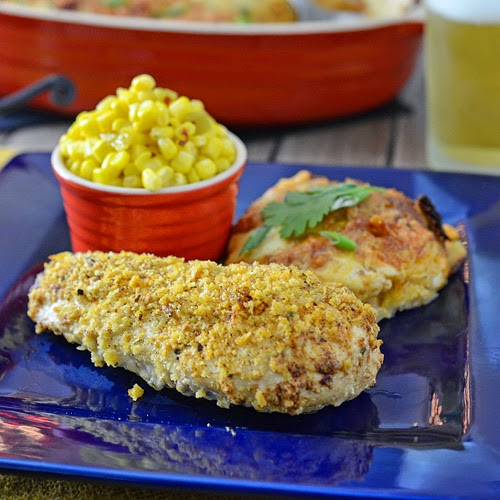 The cotija cheese and Mexican Crema used to be a little difficult to find but now most grocery stores stock these in their refrigerated Latin food section or dairy department.  Cotija is salty and nutty, similar to Parmesan and you could substitute that in a pinch.  The crema could be substituted with either sour cream or non-fat Greek yogurt.  If you are a cilantro-phobe, you can simply replace it with dried parsley.

You can pick up a BBQ rotisserie chicken for just a few bucks at most grocery stores now.  While they are convenient when you are on the run, they sure don't taste as good as ones that you make yourself. Hand made the hard way just tastes better. 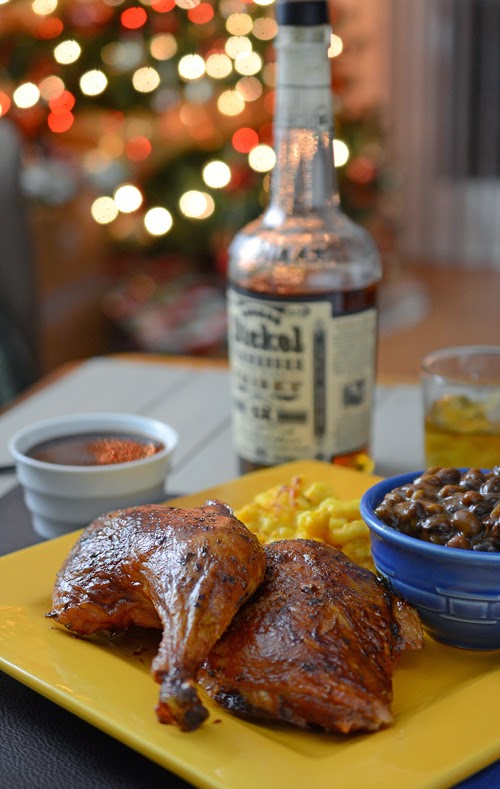 This recipe comes from Adam Perry Lang .  APL is a restauranteur, a classically trained chef, celebrity pitmaster for the Jimmy Kimmel show, and the author of highly acclaimed BBQ books, such as; Serious BBQ, BBQ25, and Charred and Scruffed.

My hands-on cooking style (called "fussy" by my wife) is heavily influenced by these three books. Adam calls it "active grilling" and I like that term better. Adam is on a tour across the country with George Dickel celebrating American craftsmanship - things hand made the hard way like George Dickel whiskey crafted here in Tennessee. I recently had the opportunity to interview both Adam and Doug Kragel, Master of Whiskey, about BBQ and Tennessee whiskey.


In addition to the interview, Adam shared these two recipes for a hand made rub and sauce.

Making a rub from whole spices like this is an extra step or two but it unleashes a flavor that you can't get from pre-ground spices and herbs.