I shoot pictures of most of the stuff that I cook but not everything makes it to my blog.

Reasons things might not make the cut to show up on the blog are things such as:
Here are some examples for cooks in the past few weeks that didn't make it.

Pasta with ham and peas 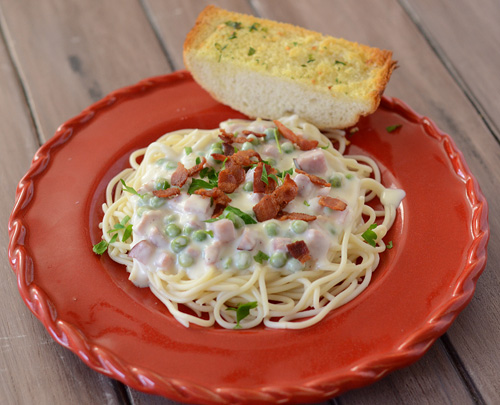 A "leftover throw together".  I was just using up leftover ham and cooked noodles.  Made a white sauce and then added some cream cheese, pepper, salt, and red pepper flake.  Added frozen peas and chopped ham and topped with chopped bacon. 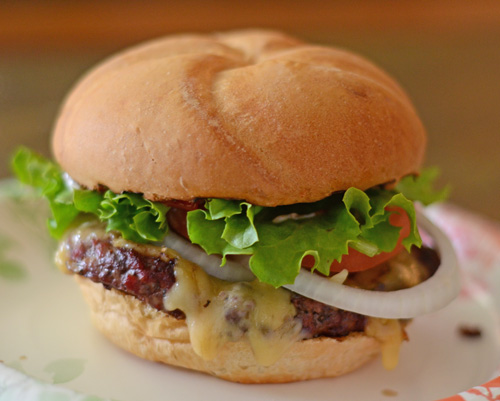 I fresh ground a tri tip roast and a chuck roast for burgers.  I grilled a dozen burgers on the Big Green Egg in batches.  I didn't post it because the meat mixture was too lean for my tastes and the texture suffered as a result.  I have several more grinds that I am working on and my favorite will eventually be posted. 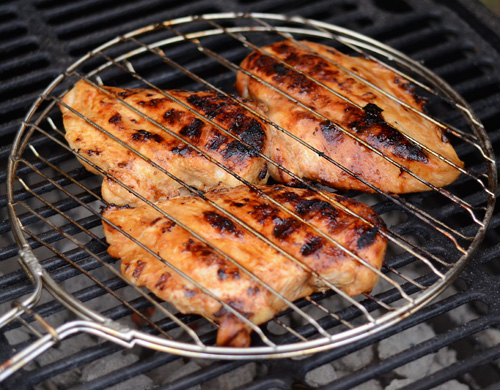 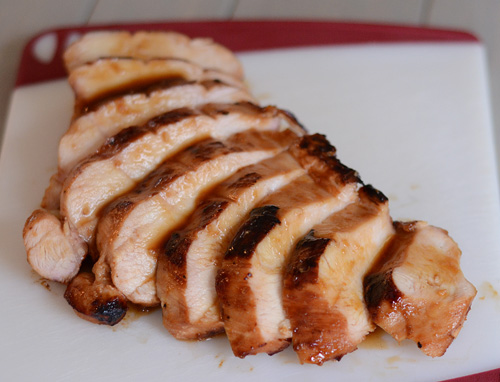 This was a practice run for our upcoming Blogger Party (click here for details).  I was using the America's Test Kitchen version but divided the finishing sauce so I could use it as a baste too.  Using several quesadilla baskets like the one shown, it lets me "turn turn" (huli huli) the chicken frequently and easily so I will be able to crank a bunch out in a short period of time at the party.  Will be a future post after the party with better pictures. 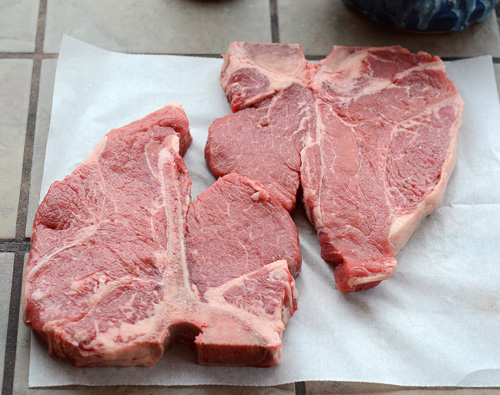 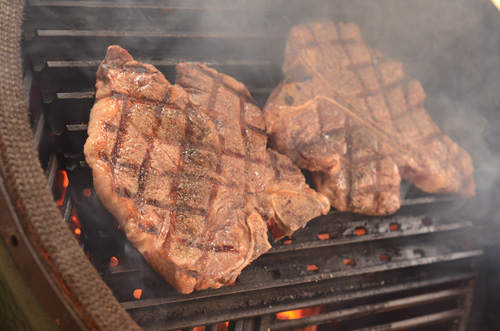 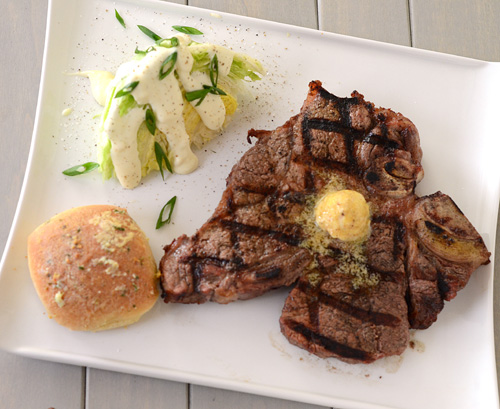 I got a good deal on two pretty T-bones (closer to Porterhouse steaks) at Food City.   Seasoned with salt and pepper, grilled and then topped with a compound butter using Dizzy Pig Cowlick seasoning.  This was just a quickie.

While all of this stuff doesn't make it to the blog, I do post almost everything on my Nibble Me This Facebook page .  If you want to see behind the scenes, trial and error kind of stuff, follow that page.
Chris at 1:50 PM
Share

Fundamental is where I went with Round 2 of Brat-ketology during last weekends tournament games.  I mean, how much more fundamental can you get than the flavor pairings of brats, pretzels, beer, and mustard? 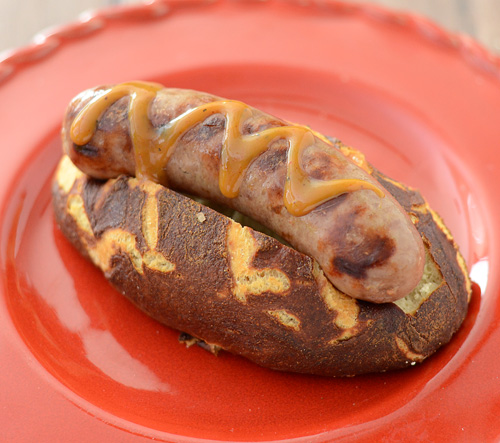 
Pretzel rolls have been all the rage among food sites and blogs the past few years and it was something that I have been wanting to try.   I ended up picking this recipe from SheSimmers.com and pretty much followed it as written but baked them on Alexis' Big Green Egg.

The roll recipe calls for having water in the oven when baking.  Normally I bake in the Egg with the plate setter "legs down".  In this case, I put it in legs up, a pie pan with water on it, topped that with a cooking grate and then a pizza stone. 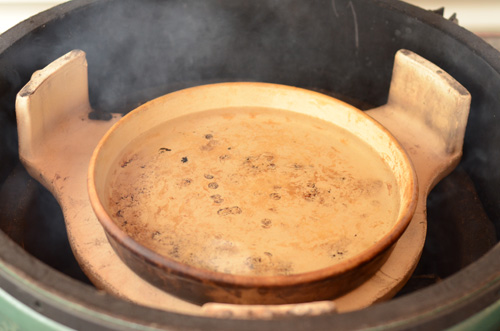 The buns had great flavor but the downside was that there was too much bread to brat ratio.  Next time I would shape the buns smaller perhaps. I want the bread to be a supporting player, the brat is the point guard.

[Standard Disclaimer]  I am on Johnsonville's Big Taste Grillers Panel and received these bratwursts at no charge.
Chris at 7:34 PM
Share

With some major upsets this past weekend in college basketball, a lot of brackets were busted in office pools across the nation.  That's why I am glued to the games during the tournament, anything can happen.  Cinderella stories and heart breakers keep it interesting.

For game day eats this past weekend, instead of "bracketology" that the commentators debate, we did "brat-ketology" pairing a few sausage dishes.  For the first round, I made up some Chicken Sausage Bruschetta that were easy and simple. 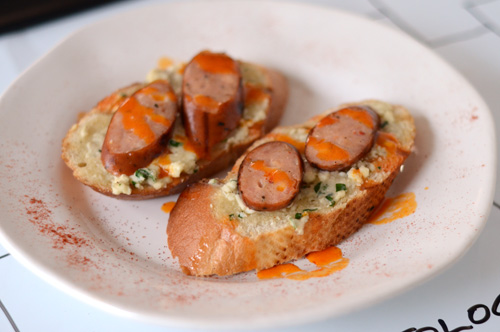 
Doing a simple grilled toast like this is a game day favorite of mine.  It is fast, flexible and inexpensive.  It can be prepared ahead and then just assembled & grilled onsite if you are tailgating.

Coming up for Round 2:  Beer Basted Brats in Pretzel Buns.

[Standard Disclaimer]  I am a member of Johnsonville's Big Taste Grillers Panel and as such, get free and new products to try; however, I paid full price for these sausages.
Chris at 3:38 PM
Share

How would you like to win a trip to this year's Memphis In May BBQ championship?   How about grilling lessons from World Champion pitmasters Chris Lilly and Melissa Cookston?


All you have to do is go to Grilling.com and enter your idea for 5 ingredients and a clever recipe name for the Kingsford One Bite Challenge for a chance to win.  You don't have to post pictures, a full recipe or anything.  Just the 5 ingredients and the title.  Walt S. of McKenzie, TN did that and this is what he offered:

Wally Wings
Here is my spin on Walt's wings.  I used turbinado sugar to avoid the sugar burning, general wing pieces,  and used buffalo sauce.   This is a good one for the basketball games going on. 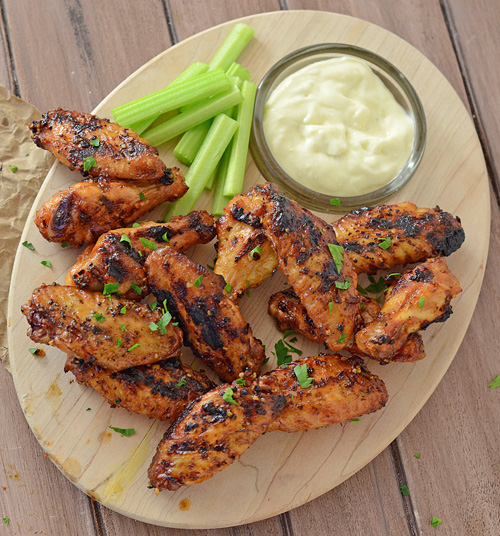 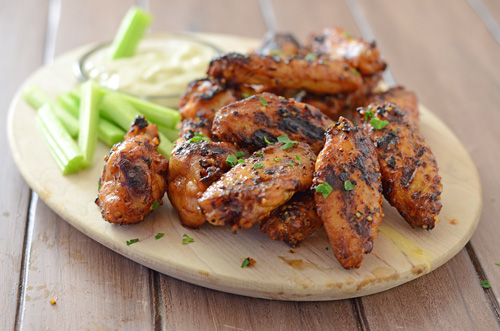 Is buffalo sauce a single ingredient?  It is, if the the rules don't say it isn't!  You can used a bottled buffalo wing sauce.  The basic buffalo sauce that I use is 1/4 cup butter, 1/4 cup cayenne hot sauce, and 1 tsp Worcestershire sauce.

I'll be at Memphis In May this year, privileged to be on the best team, Too Sauced To Pork.  You may have seen the team earlier this year on Cooking Competitions: Exposed on the Travel Channel.  If you are there, stop by and say hello.
Chris at 11:17 PM
Share

Leftover ham is a wonderful problem to have. After 5 days of eating ham, last night Trevor still said this was the best ham ever.

This has been one of our favorite leftover ham recipes.  The crispy pie crust gives way to reveal that hot creamy interior that is so delicious. 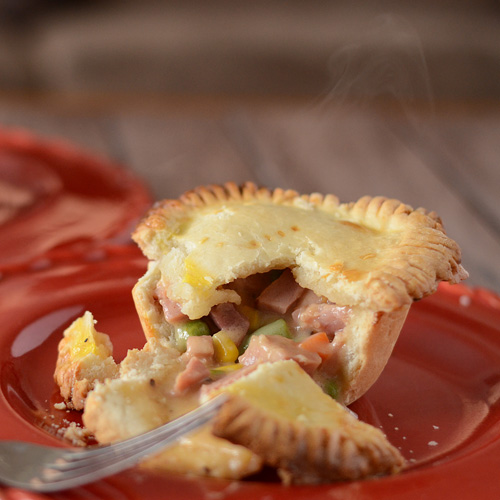 You can serve it as a whole pot pie or make it for individual serving sizes.    The 1.5 cup ramekin size would be good for someone with a huge appetite.  For us, the perfect individual size is doing this in a large muffin tin. 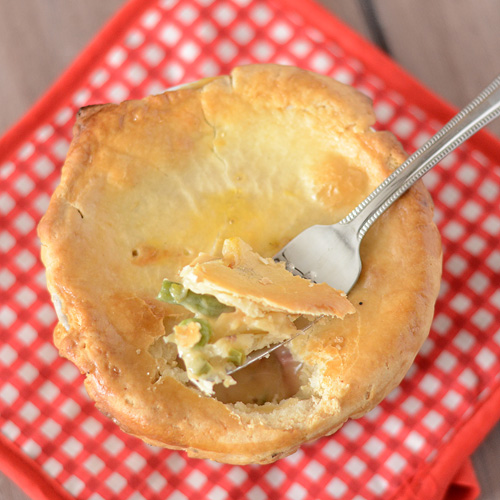 What is your favorite way to use up leftover ham?
Chris at 6:28 PM
Share

How I Cook Ham on the Grill

"...then hang them in the house and neither bats nor worms will touch them."


I was going to be all "Hey guys, Easter is just around the corner, time to break out the ham recipes" and stuff but I found that opening quote much more shocking.

That quote is from Marcus Porcius Cato in 50 BC writing about how the Romans cured hams in his treatises on Roman farm management.  From the old days until relatively recently, hams were made basically the same way.  They were cured in huge clay jars or containers for days and weeks, then smoked and aged.  Now most are injected with a witch's brew of nitrites and tumbled to expedite the process to just a few hours.

I did a test run on a ham this weekend and thought I would write up how I prepare hams on the grill. 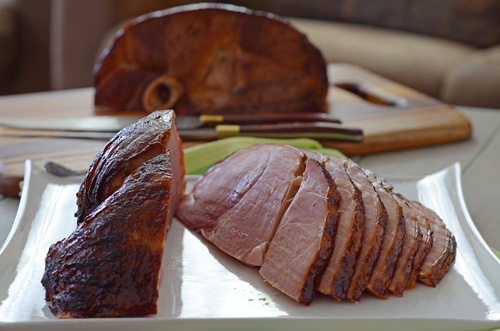 Preparing the Grill (I use a Big Green Egg) 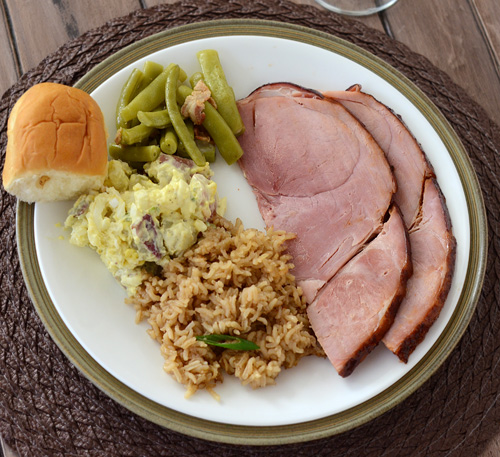 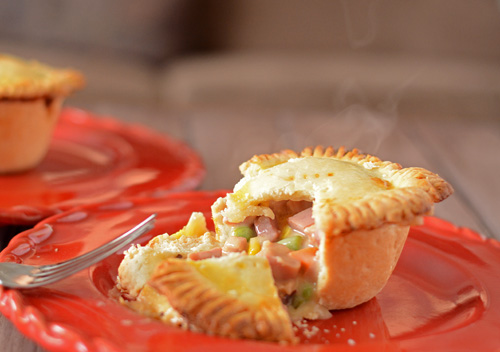 So what are your favorite ham tips or ham recipes?

One Bite Challenge - My Spin

Want an all expenses paid trip to the 2013 Memphis In May BBQ Contest?  Stay tuned until the end of this post.

Just another reminder that the Kingsford Invitational BBQ contest will be on television March 17 on the  Destination America network at 10PM (Eastern).  That's this Sunday if you don't have a calendar handy.

That contest took the winners of 2012's biggest BBQ events (Memphis in May, Jack Daniels, American Royal, etc) and pitted them against each other for a winner take all $50,000 best of barbecue championship.  One of curve balls about this competition was a "One Bite Challenge" on the opening night.  Not only was this challenge worth a $5,000 bonus but it also gave them a massively important 1 point lead in the overall judging.

The rules, from what I recall, were that the recipe had to pack in the most flavor

Here is what my attempt would have been in that event.   These are a spin on the "Turtle Eggs" that I normally do with pork sausage and bbq seasonings. 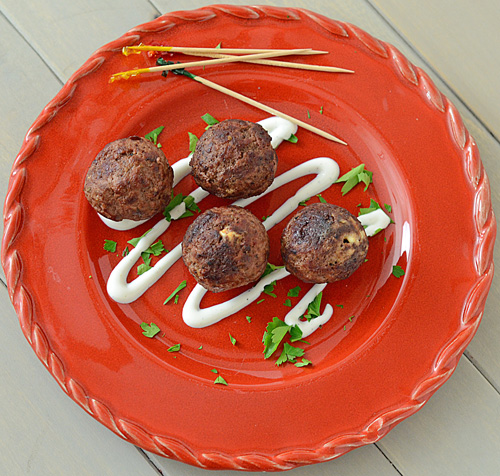 Ingredients
Instructions
The competitors played a little loose with Rule # 2 by counting things like "BBQ rub" or "Sweet Chile Sauce" as a single ingredient.  So I won't say that I was cheating here.  Let's just say that I "leveraged any ambiguity in the established guidelines in advantage of my favor" by using the Feta cheese that was already loaded with seasonings. 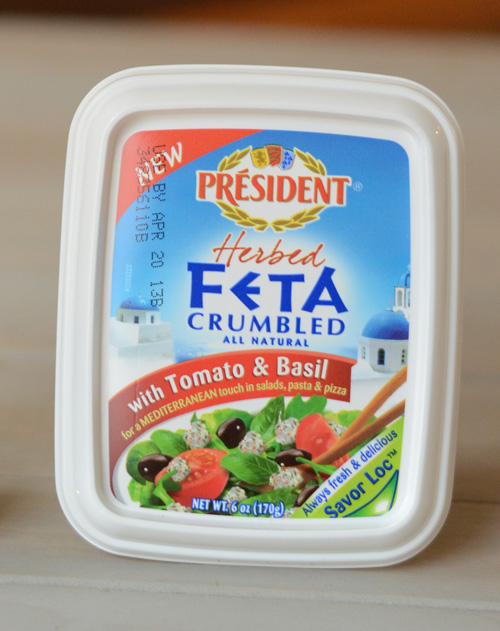 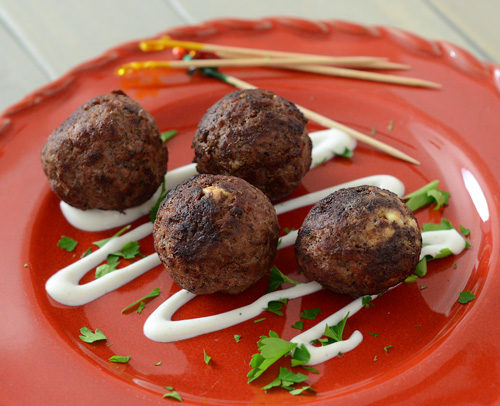 Have an idea of what YOU would make if you had a great prize at stake?  Here is your chance.  Kingsford is giving one lucky winner a trip to the 2013 Memphis In May BBQ Contest.  Just go to Grilling.com and enter the One Bite Challenge giveaway.
Chris at 12:00 PM
Share
‹
›
Home
View web version